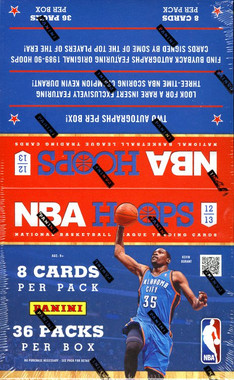 - Two autographs per hobby box!
- Debut inserts include Draft Night Signatures, Kobe's All-Rookie Team, Rookie Impact and Spark Plugs!
- Look for the short-printed Champions card again this year to complete your set!
- One of One Artist's Proof Black parallels return!
- Your first chance to pull live autographs of rookies from the 2011-12 and 2012-13 draft classes!
- Look for autographs of the NBA's top players!
- The 2011-12 and 2012-13 rookie classes make their debut in a special Kobe set going back to the roots of the Hoops brand!
- Last year it was Kobe Black Mamba and Blake Superior; this year it's DURANTULA!
- Look for original 1989-90 Hoops cards with autographs and an embossed Recollection Collection stamp!