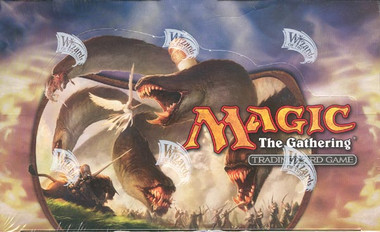 MAGIC THE GATHERING CCG: CONFLUX BOOSTER
As the shards collide, an ancient evil is revealed...

KEY SELLING POINTS
-Conflux is the second set in the Shards of Alara block.
-In Conflux, it is revealed that a sinister force is conspiring to reunite Alara. As this process begins, planes of reality begin to overlap, creating chaos on all five Shards of Alara.
-Conflux expands on the mechanics introduced in Shards of Alara, and injects even more powerful gold cards into the block.

SET SIZE AND PRODUCT OFFERINGS
-145 black-bordered cards (10 Mythic Rare, 35 rare, 40 uncommon, 60 common)
-Conflux will be sold in Booster Packs, Intro Packs, & Fat Packs (Fat Packs contain 8 booster packs).
-Intro packs are a new SKU introduced with Shards of Alara. Each Intro Pack contains a ready-to-play 41 card deck, 1 Booster pack, a strategy insert, and a Magic the Gathering rules insert for new players. Each deck comes with two rare cards, one of which is a premium foil rare card that is visible through the front of the box. There are 5 different Intro Packs in Conflux, packed 5 per box.