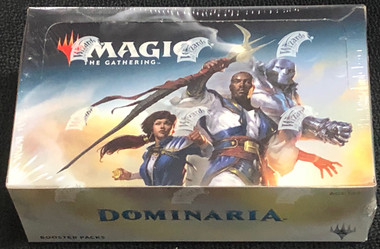 Dominaria is set on the plane of the same name. Returning legendary characters are Teferi, Jhoira and Karn.

The set debuts legendary sorcery cards that capture extraordinary moments from main characters' pasts. These powerful spells can be played only with the assistance of a legendary creature or planeswalker in play on your side of the battlefield.

The set sees the return of Kicker, a keyword ability that allows the player to pay an extra cost for a bonus effect. Kicker was first featured in the Invasion block and last seen in the Zendikar block.

The set introduces a new enchantment subtype: Saga. Each Saga tells the story of a key event from the past as it unfolds during each of the player's turns. As the Saga enters the battlefield and after the player's draw step, they add a lore counter, sacrifice after the third chapter ability.

Historic is a new game term that refers to a card that has the legendary supertype, the artifact card type, or the Saga enchantment type. Some abilities trigger whenever you cast a historic spell.

Starting with this set, all legendary cards except planeswalkers will have a slightly different card frame with additional flourishes on the title bar.

Enemy check lands: A cycle of rare lands that tap for one of two colors of mana and enter the battlefield tapped unless you control a land of one of the two associated types. Originally printed in Innistrad. (Isolated Chapel, Woodland Cemetery, Hinterland Harbor, Sulfur Falls, Clifftop Retreat)