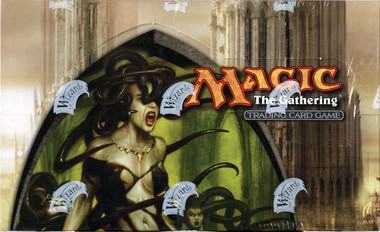 The City of Guilds

In the largest metropolis of a city-covered plane, perspectives will clash and laws will be tested. From the depths under the city to its lofty spires above, Ravnica's citizens eke out an existence even as all around them ancient guilds vie for control and power.

City of Guilds is set in an exotic new location in the Multiverse and will introduce a new storyline, striking creatures, and innovative game mechanics. Ravnica features 306 black-bordered cards, available in standard and foil versions.

Gold cards are back! Players are expecting and looking forward to their return.

Ravnica's guild system enhances a player's ability to play multicolored decks. Rather than focusing on the five colors of Magic, Ravnica features a guild dynamic that rewards players for using color pairs. Each guild has its own flavor, identity, characters and mechanics.