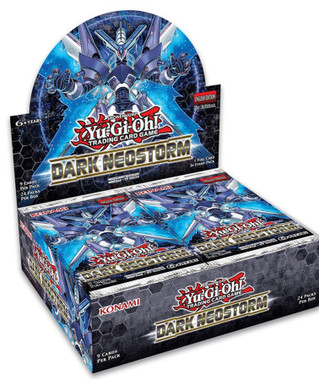 Forget about April showers, the real storm is brewing May 3rd, the official release date of Dark Neostorm, the last 100-card booster set of the 2018-2019 Dueling season. Each of the core booster sets this past season highlighted one of the main Special Summoning mechanics from previous eras of the game, and in Dark Neostorm it’s Xyz Summoning’s turn to shine!

Spearheading the return of Xyz Monsters are the Super Quantum mecha pilots! These heroes are joined by a mysterious masked Super Quantum pilot clad in white! This pilot has their own Super Quantal mecha that negates monster effects and can join up with other monsters to form a new Link Monster variation on Super Quantal Mech King Great Magnus. Meanwhile, all the major players in the battle over the World Legacies have gathered, and Armageddon is nigh! World Chalice, Krawler, Mekk-Knight, Crusadia, Orcust, and Guardragon all make an appearance in Dark Neostorm alongside a brand-new Knightmare that can wipe the field clean of Link Monsters!

Dark Neostorm also follows up from October’s Legendary Hero Decks by introducing brand-new cards for Destiny HERO Decks including a new Fusion Monster that can rearrange the top cards of either player’s Deck – perfect for putting powerful Normal Spells on top of your Deck for Destiny HERO – Diamond Dude to find! In addition to all that, Duelists will be able to find a wide variety of cards for many different strategies and situations, including...
- A metamorphic Dragon that lets you trade a card in-hand for a monster that matches the Type and Attribute, but not the name, of something on the field.
- The first new “Assault Mode” monster in a decade, designed to work in a Deck using the “T.G.” cards from Savage Strike.
- Multiple new “discard” Effect Monsters, including one that boosts your LP for each Effect Monster your opponent Special Summons and another that takes aim at Extra Deck “climbing” strategies and other similar strategies by preventing a monster from being Tributed or used as material for a new Extra Deck monster.
- A Reinforcement of the Army-like Spell Card for Cyberse monsters, the perfect addition to any Deck based around the cards from Structure Deck: Soulburner, Structure Deck: Powercode Link, or Structure Deck: Cyberse Link.
- A Danger!-ous Spell Card that lets you escape from the clutches of a massive monster only to find yourself face-to-face with something smaller and possibly fiercer.
- A Link Monster for one of the most popular Xyz-focused Decks of all-time: Burning Abyss!
- Brand-new cards for Valkyrie Decks!